Don’t Take My Word for it, Listen to Bill Gates

Bill Gates, one of the great technology entrepreneurs of our time, is credited with saying: “If I had one dollar left, I’d spend it on PR.”

Over the years of speaking to some of our different clients, CEOs or other C-Suite thought leaders about defensive or aggressive strategic agendas and professional servicing budgets, I would’ve loved to have suggested, don’t take my word for it, just listen to the advice of Bill Gates! If only it was that easy.

Last year, our firm had the opportunity to onboard a new clean chemistry technology firm. Its patented innovation has the potential to revolutionize fire science and the massive struggle much of the Western United States and Europe has been having in containing wildfires.

The strategic messaging shaped for that start-up, its CEO and earned media in many markets across the nation, propelled them into the arms of waiting private equity investors competing to have a piece of the potential next “can’t miss” market innovation. We all win when the client embraces collaboration.

Just recently, in a call with that same CEO, we went over their growth plans, possible acquisitions and customer accounts that appear to be on the runway. 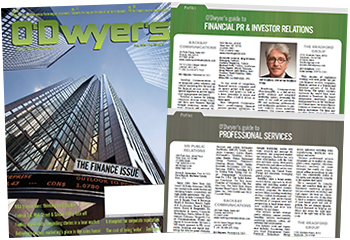 The CEO recognizes that by deeply engaging with and utilizing strategic communications and public relations counsel for more than just earned media, corporate shareholder interaction and social marketing, the company and its core principles get the added eyes, ears and instincts of practitioners with years of experience, as a trusted sounding board.

I’ve also experienced the opposite side of the spectrum when the client is simply not tuned into to taking anyone’s advice.

As a young practitioner, then at a large agency, I accompanied the founder and CEO of a well-known commercial brand to federal court for his guilty plea. He had apparently “left off the last-S for savings,” a refrain from his well-worn TV commercials, but in this case, it was for failure to pay taxes.

The hearing and aftermath seemed to go according to plan until he saw a network TV crew at the front and rear door of the courthouse. He panicked, forgot about our prepared public statement and sprinted for a taxi instead. He gave the news just what they wanted: A new lead story. Instead of a considered and serious response, cameras captured a CEO sprinting away from them, a caricature of a powerful man trying to duck responsibility. His investors, franchisees and corporate team regretted his actions right away.

In February, I read in Bloomberg News about a startup delivery company whose recent round of funding valued the company at $7.1 billion. The company was in the news for purported wage theft, by deducting and keeping tips given by customer through its app, which were intended for delivery drivers.

The company’s co-founder and CEO then told Bloomberg, “It’s unfortunate that the activities of others have mischaracterized what we’ve been doing for two years.” He then continued to defend their business model, saying, “There was no coverage of this (scandal) two years ago.”

How could a company, with such technological promise, growing market share potential and significant investors be so imprudent and allow themselves to get in such a reputational bind?

Perhaps because by May the company continued to welcome more investors as its valuation reached $12.6 billion. Does that mean the company’s problem and accusers went away?

July came and so did a star New York Times investigative reporter, who went undercover for six days as a delivery person for this company and three of its competitors, including Uber Eats and Seamless. The journalist’s story confirmed and chronicled similar wage theft, as was alleged months earlier.

In the world of Twitter, tens of thousands of news feeds—including those belonging to its competitors—are now jam-packed with harmful messaging that will certainly have an impact somewhere along the line. Elected leaders in the cities where they do business are now also aggressively denouncing their business practices, promising investigations and legislation to mandate tighter regulations and strict penalties.

I’d prefer to contrast that regrettable case study with a smart, forward-looking client call I received this past winter while I was away on a family vacation. My phone rang and it was a longtime client, the Chair and CEO of a financial firm. Her call and questions related to something that her company would likely not be taking action on, or even announcing, until perhaps the fall of that year, more than six months into the future. She respected and valued our opinion and thoughts.

The message to us from the leader of the company was, you’re a valued partner and earned a seat at the table, but it also served as a fresh reminder to put on our thinking caps, and study all of the pertinent communications matters or examine if any pitfalls exist on the path to the company’s continued growth and success.

In many cases, the road to long-term agency and corporate partnerships can begin at the crisis stage. It’s a time when the actions of true communications professionals can have tremendous value on a company, its executive leadership or its brand value. That goodwill should carry forward with a results-driven approach and sage guidance, along with continued diligence and dedication.

I’ve been fortunate throughout my career to have many smart and remarkable CEO-leaders who have allowed us to be an integral part of their team. They include the leaders of large pension funds, corporate shareholder activists, banks and Wall Street firms, municipal comptrollers, serial-entrepreneurs and—unfortunately for them—a few corporate leaders under the duress of litigation or corporate restructuring, who called on us to help them navigate through tough times.

It’s my opinion the ideal client relationship is one where the company brain trust works closely and collaboratively with their communications team leadership. And that the CEO who can successfully recognize and entrust their ideas and vision to the communications team will benefit shareholders, channel partners and customers via a superior reputation and brand experience.